Joined 13 d ago
·
9 Posts
Just got my 1st Mazda ever in 23 years of driving & liking it a lot so far. Have always had Nissan's before as they've served me well, but my 2006 P12 Primers that I've had nearly 8 years, although mechanically sound, was getting a bit long in the tooth.

The 6 is in pretty good nick, but I will need the wheels refurbing at some point, I'm thinking when the tyres need replacing.

I'm in the process of upgrading the stereo system & have installed a reversing camera as I would definitely miss that from the Primera. I want to do the audio properly in this car & build an amp rack covered in carpet rather than just bolting everything down to the boot floor with spaghetti wires everywhere.

Congrats on your purchase. I drove a Nissan Maxima for a a couple weeks while my 6 was getting repairs - CVT - NO THANKS.

Sent from my SM-G960U using Tapatalk

2nd one in as many day and same color too. Kinda looks not hateful in that trim.
P

TalonTsi90 said:
2nd one in as many day and same color too. Kinda looks not hateful in that trim.
Click to expand...

They look like a different colour to me. I don't know what paint code Allen11_SportHatch is, but it looks darker than the velocity red on mine, but I could be wrong on that one. Photo's can fib a bit.

Also, "not that hateful" is a vast improvement over my last cars apperance. The fact that the shade of red on different panels didn't match was one of the most interesting things about it. I just hope the Mazda is as reliable as old faithful.

I bet it's a nice step up from the godawful boring Primera? No offence...
P

Raymond said:
Welcome along. Also on my first ever Mazda but a gen 3. Lovely things.

I bet it's a nice step up from the godawful boring Primera? No offence...
Click to expand...

None taken. I liked the Primera but it had it's faults, the main one being you were over 3000rpm at 70mph in 5th, which was noisy. The 6 is a lot quieter, more comfortable, looks nicer, & drives better. It would have been nice if the 6 had a reversing camera as standard, but I've sorted that now by swapping out the head unit for an Android one. Just need to finish wiring up the audio & at some point replacing the door speakers, but even these are better than the Nissan's awful standard ones.

The Android thing you've installed looks pretty neat. Mine has the reverse camera as standard but to be honest I don't actually use it much. Just too used to using my mirrors I guess.

Sounds like you have some plans. Get yourself a built tread posted. I'd like to follow what you're going to do to the thing Mine's here
P

Joined 13 d ago
·
9 Posts
The 1.8 wasn't very quick. The central dash was my most liked & hated thing about the Primera. I liked the symmetry & ease of use. What I didn't like was that on a really sunny day you just couldn't see it for reflections.

Not planning anything big at all, just want to make sure my 2 old amps & subs are installed much tidier than the old car

& get the wheels refurbished at some point.

I really would have liked the 2013+ model, but wasn't quite within my budget. Yours looks good.

2014 Sport NAV - Jet Black Diesel MT6
Joined 5 mo ago
·
272 Posts
I think there's a little more room to play with in the boot of the 6 so should make for a tidy install. Keep us updated.

I really like those wheels on the gen2. I think they would look even better in silver rather than grey but that's your choice.

I had to stretch my budget a little to get mine as I had to buy the other half a new car as well. Fair is fair. Time to start saving for a few years again and aim for something newer
P

Joined 13 d ago
·
9 Posts
There's definitely more room in the boot. Wish there was some sort of hooks or a net, or even somewhere to hook a bungie cord. Its a big blank space.

There were very few petrol 6's in my area when I was shopping, the only other one I liked had the silver wheels but was 140 miles away. I'm really not sure which colour I prefer, but when I get these refurbished I would like them to pop more, so may think of a change of colour/finish. Not sure what would look good, but my brain keeps throwing the word shiny at me.

2014 Sport NAV - Jet Black Diesel MT6
Joined 5 mo ago
·
272 Posts
Mine is a saloon but the boot is huuuuge. No hooks or nowt as you said. Shopping is all over the place when we get back from a shopping trip lol. 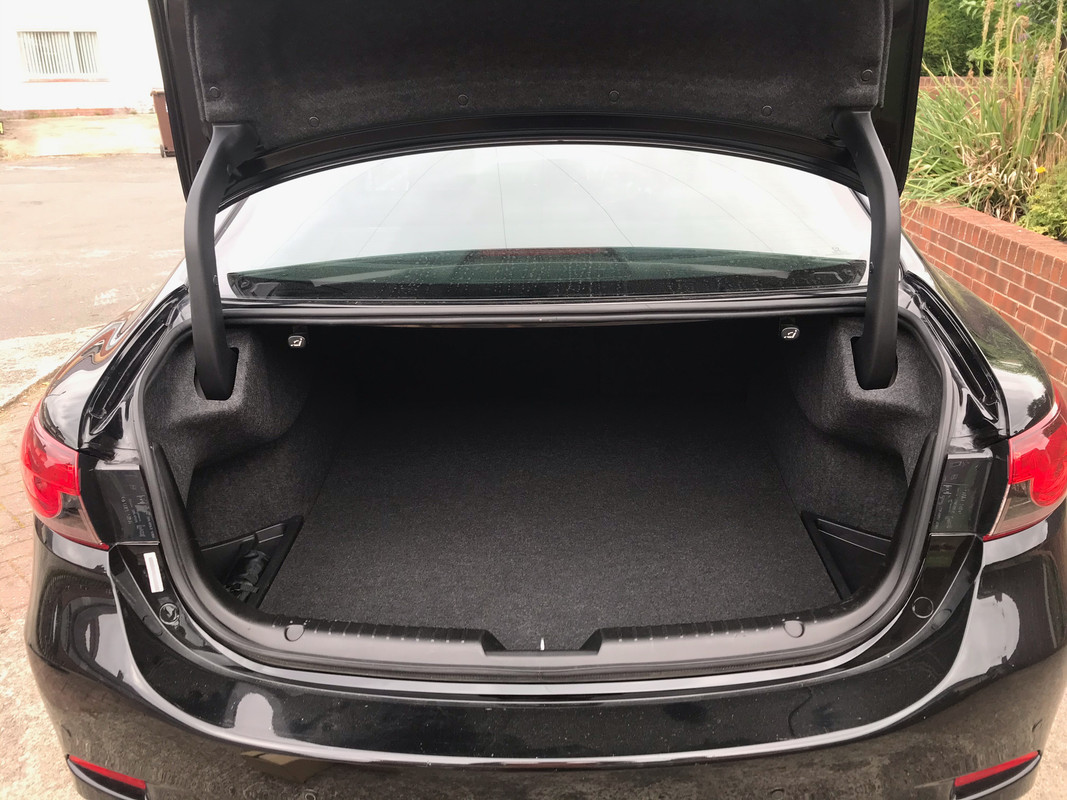 Joined 13 d ago
·
9 Posts
What are those plastic bins on either side of your boot for? The hatchback doesn't have those (edit: duh, of coure it doesn't, yours is a later model...it's early & my brain hasn't kicked in yet).It has the under carpet polystyrene storage where a spare wheel really should be (which I plan to remedy at some point), & I did realise there are few tie down points in the boot of the hatchback, but not a lot. As you can see, I've managed to get the RCA's & power through to the boot for the audio, just need to get the speaker wires routed to go from the Kenwood amp back to the head unit, & then build an amp rack. Yes, that is an old piece of drainage pipe I used for a porthole in the sub box.

I am waiting for an email back from Joying. When I installed the head unit the steering wheel controls worked (if not completely accurate), but when I installed the rear view camera they stopped. Joying gave me an option to bypass the canbus box which got the steering wheel controls working perfectly, but after removing the canbus, the top dash display that did show radio stations etc from the Joying unit is now completely blank.The Raise Tech error message shown below only appeared after installing the new head unit, & only showed briefly when you 1st turned on the ignition. Once the Joying unit kicked in it gave the standard welcome message & then displayed whatever it was doing. The rest of the display is completely unnafected & works fine. The Joying unit is pretty decent, but the documentation that came with it was shockingly bad. Their email support has been very good so far though.

2014 Sport NAV - Jet Black Diesel MT6
Joined 5 mo ago
·
272 Posts
Yeah later model... Mine hasn't got a spare wheel either. Just the repair kit with pump. I might get myself a spare with the jack and brace but begrudge spending £150.00 on a space saver

No hooks or tie down points at all. The plastic trays are just storage trays. Handy from keeping your beers from rolling around your boot..
P

Raymond said:
Yeah later model... Mine hasn't got a spare wheel either. Just the repair kit with pump. I might get myself a spare with the jack and brace but begrudge spending £150.00 on a space saver

No hooks or tie down points at all. The plastic trays are just storage trays. Handy from keeping your beers from rolling around your boot..
Click to expand...

Beer is important, so it's good see that Mazda have their priorities correct.

You didn't even get a jack with the car? I've definitely got that in the boot, although without a spare wheel to swap, I'm not really sure how much use it is. When I do get round to getting a spare, I think it'll be a cheap full size steel wheel with a budget tyre on it. It's a full sized wheel well, so why not.

2014 Sport NAV - Jet Black Diesel MT6
Joined 5 mo ago
·
272 Posts
No, none of these do. There is a space for a jack and a brace and the wheel well is only deep enough for a space saver I think.

I'll get round to buy a set at some point. I have more important things (read non essential) to buy for the car...
M