Joined Dec 13, 2016
·
511 Posts
One of my garage openers quit after 11 years, went and got a modern one (Chamberlain B750C) that now comes with a bunch of features.
I haven't been able to program the Home-link on any of my vehicles, according to the website all vehicles manufactured after 2011 should be able to link to Security+ 2.0 systems. Older vehicles MAY need something called a compatibility bridge.
Has anyone here been able to link your 6 (2004-2008) to openers with this technology? Want to know before I keep trying.
► Show Full Signature
2016-Current: 2006 Mazda 6 GT - V6 - Hatchback w/NAV

Check here if you haven't already: 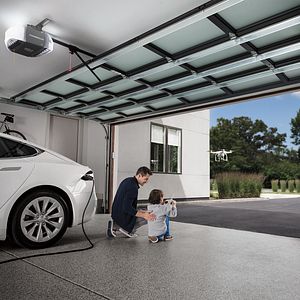 Learn about integrating HomeLink technology to your car with your Chamberlain garage door opener. See if your vehicle is compatible and find installation help.

www.chamberlain.com
Click the "Learn More" button in the middle left of the screen, under the "Connect your car to your garage" section. It will walk you through a wizard to see if your car is compatible with your opener. I did it for your opener and a 2006 M6 and it said you needed the bridge. The good news is it's only $27.50 in the US, so it's not too expensive.

The 2008 Lexus did not work directly with the openers. We had to add the “repeater”. It’s been over a year but I remember it took some screwing around with (or I just didn’t get it 🤨 ). You pair it with the openers and then you program your Homelink with the repeater. It’s been working fine since.
► Show Full Signature
'18 Machine Gray GT Reserve

Trippp said:
It’s been over a year but I remember it took some screwing around with (or I just didn’t get it 🤨 ). You pair it with the openers and then you program your Homelink with the repeater. It’s been working fine since.
Click to expand...

Yes, it's a little confusing because it's a two step process. The car first needs to learn the new remote, and then you need to program the newly taught button on the car to the opener so the rolling codes work correctly.
► Show Full Signature
2018 Signature
White Pearl - Chestnut

After a lot of searching, I learned that Security+ 2.0 only works with Homelink 4.0 which came out in 2008 but only massively rolled out in 2011.

I also found this on Amazon:
To be perfectly clear on this whole Homelink situation here is the clear answer. If your car was built in 2012 or before, you MAY have Homelink 3.0 protocol based system. If your buttons for Homelink are on your rearview mirror, you could check the BACK of the mirror, and look at the FCC, IC, or Model, look at the end, last 3 may say HL3, if it does its Homelink 3.0. If it says HL4, then its the newer Homelink 4.0. Anything HL4/Homelink 4.0 will work for SURE. Anything HL3 will not work without a repeater kit with this opener. I know this for a fact. My 2009 Hyundai Genesis has a HL3, refused to work. My 2014 Dodge Durango has a HL4, worked flawlessly. That's why a lot of newer cars work cause they started using HL4. The cutoff seems to be somewhere around 2012 (but depends on if that manufacturer moved to HL4 or not)
I also called Chamberlain (they were useless) and Homelink. The lady from Homelink wasn't very helpful either, I asked if they had a list of all the cars that came with 4.0 and the answer was no. She did said that to date, 2020 vehicles like Jaguar still come with 3.0 so as many other brands.

No idea yet what version of Homelink is installed in my 6 but I am going to assume is 3.0 so I might have to buy the compatibility bridge for it. For now, I did find the HL4 reference on the back of the rear view mirror of my Pathfinder and was also able to get it to work.
► Show Full Signature
2016-Current: 2006 Mazda 6 GT - V6 - Hatchback w/NAV