Disconnect the ignition coils, upper and lower O2 sensors, VVT solenoid and another plug that I'm unsure of its purpose 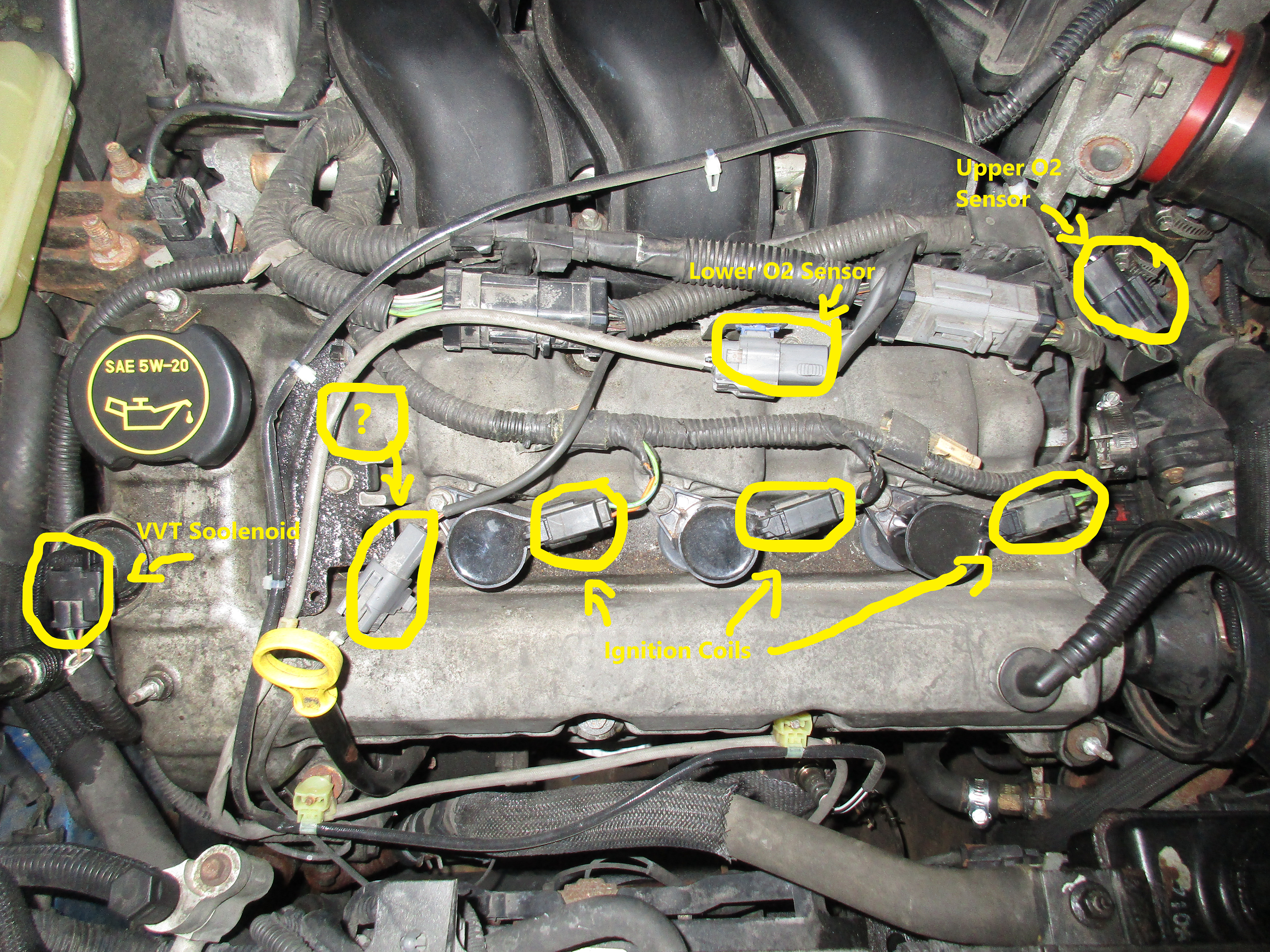 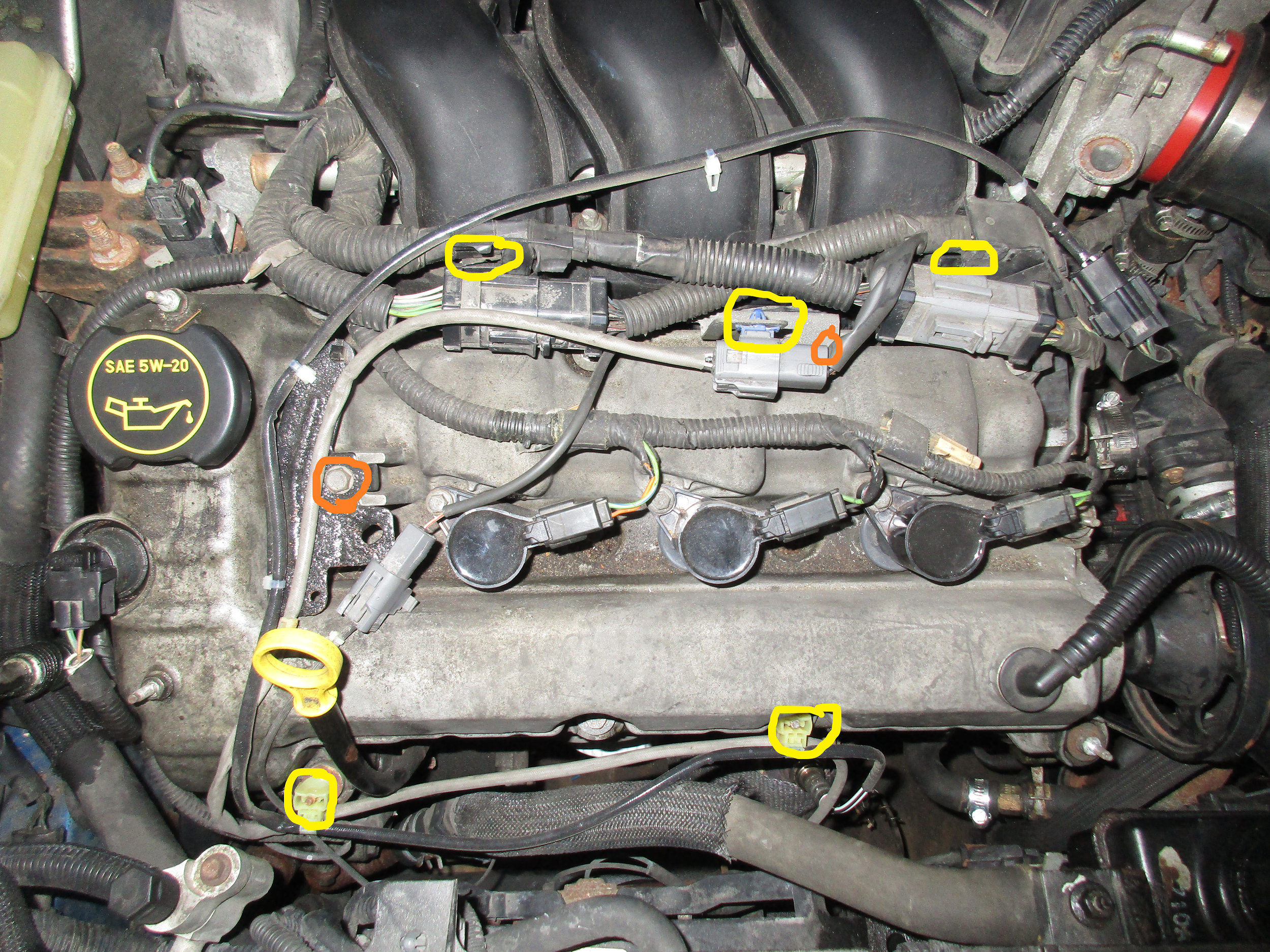 Remove the vent tube (yellow) and remove the valve cover bolts --10mm you will need a deep well socket-- (orange) NOTE: they have rubber grommets that should hold them in the valve cover once they're loose but those do sometimes come out so be sure not to lose any of the bolts or worse have one of them fall down into the engine Slowly begin prying the cover off CAREFULLY REMEMBER YOU ARE WORKING WITH ALUMINUM! Once you have it started you can continue to remove it by hand. 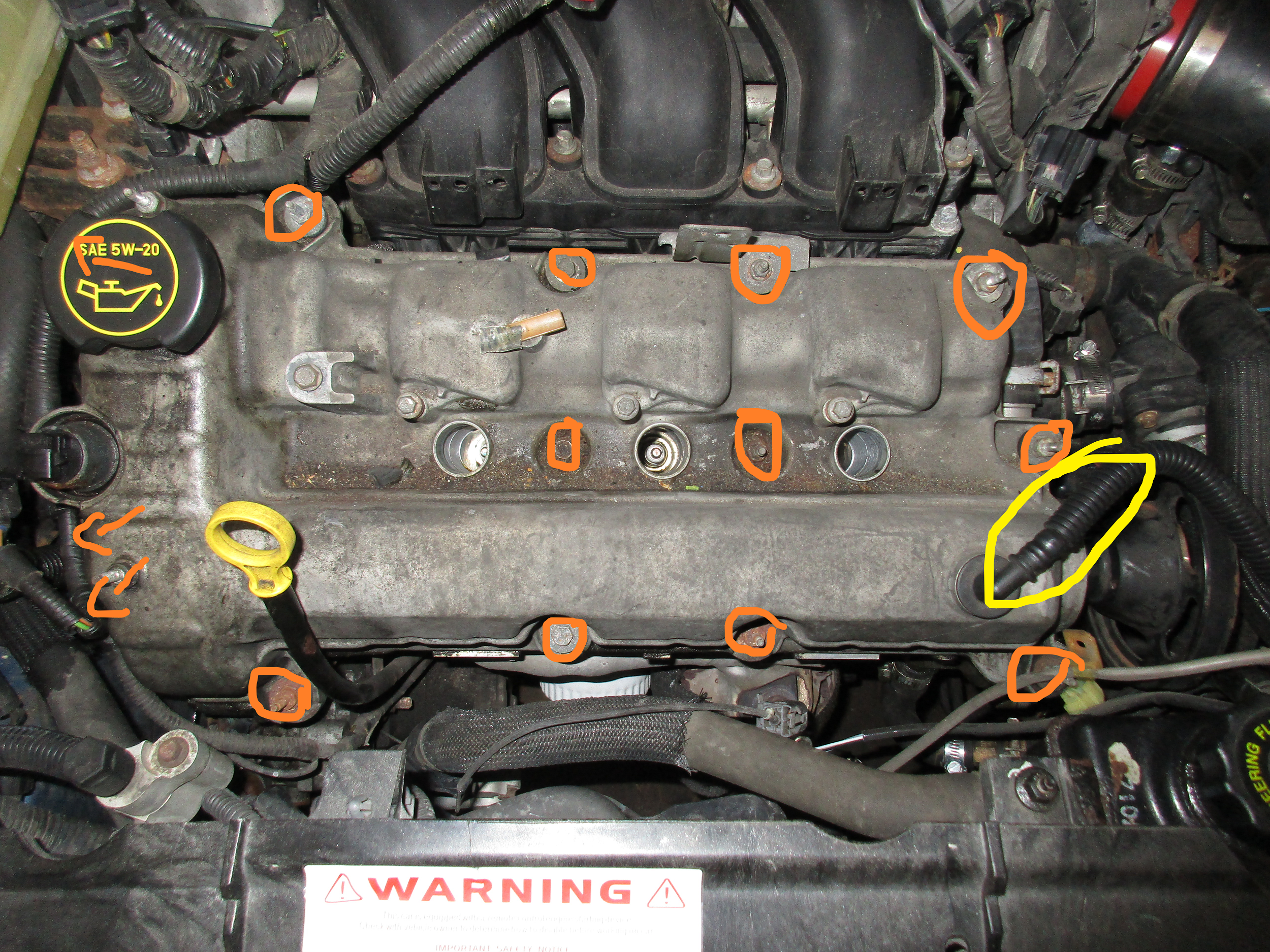 Remove the old seal and clean the surface, especially the four points where RTV sealant is used 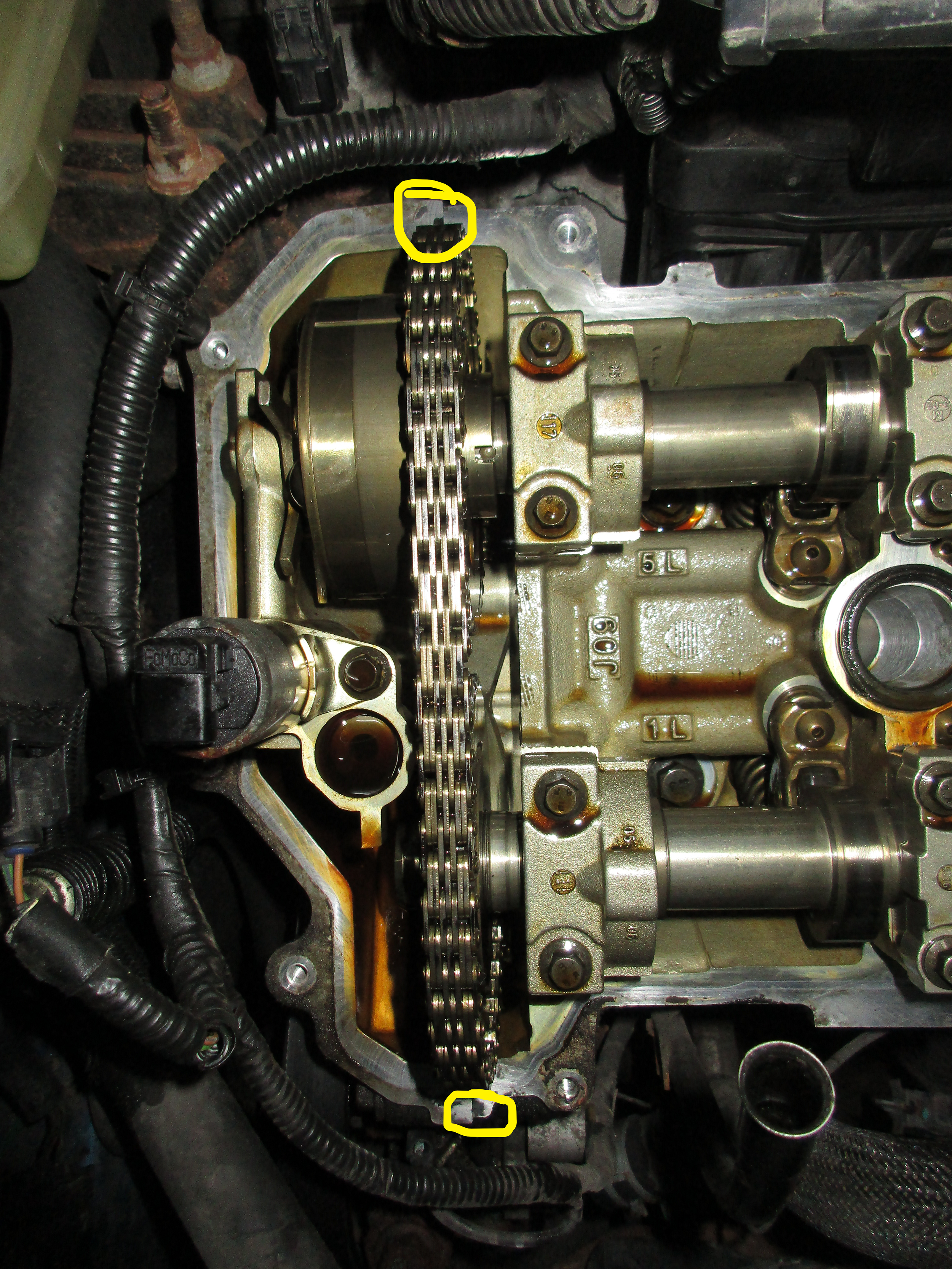 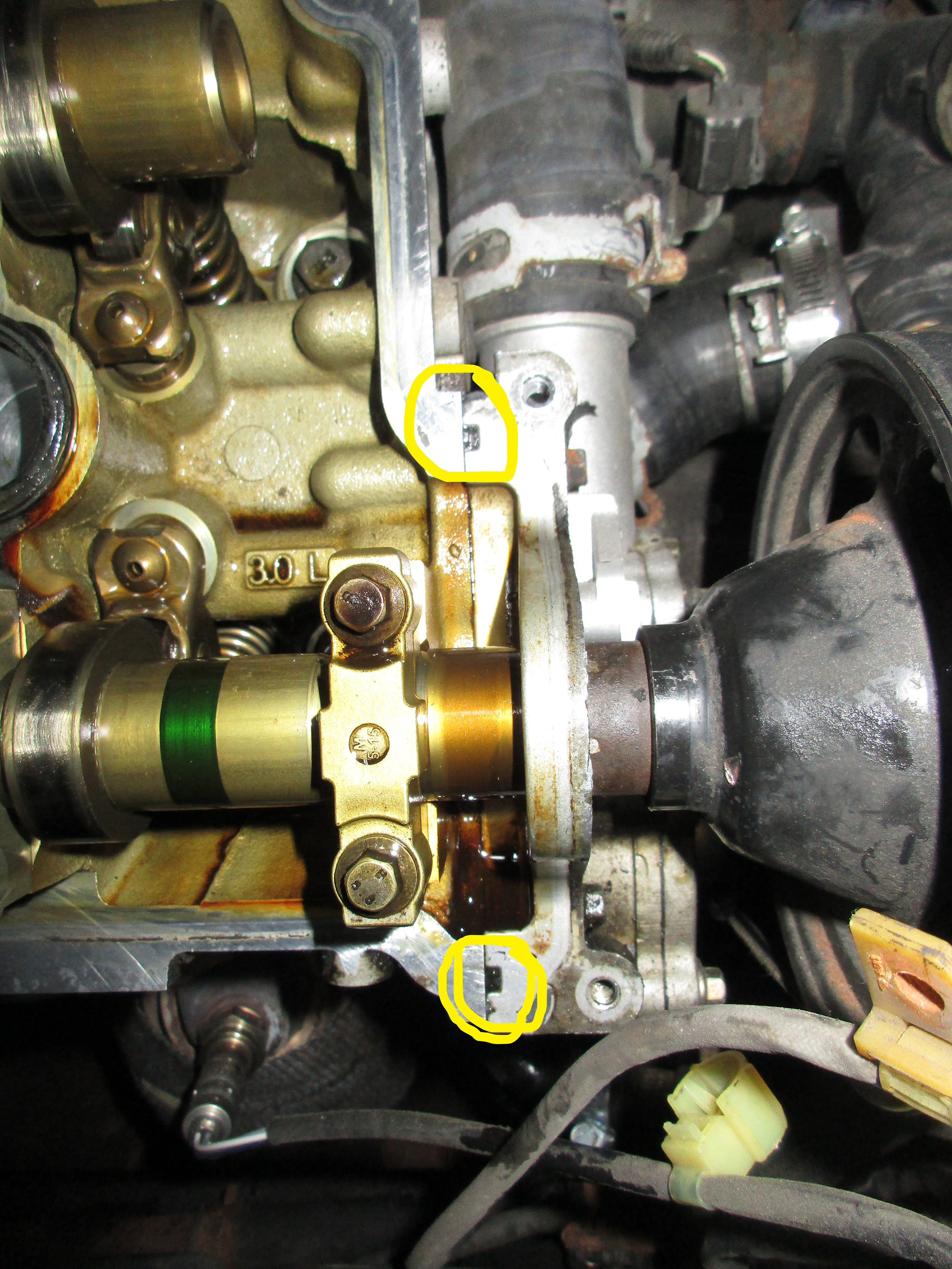 If you are replacing the OCV seal remove the old one, I found that the old seals came out much easier with heat (I used an old hair dryer). When installing the new ones the "Fusion Swap Manual" suggested you use some RTV sealant around the outer diameter of the seals as well as around the OVC where the seal would sit. Tap the new seal in place with a socket I used a 1 1/8 socket. 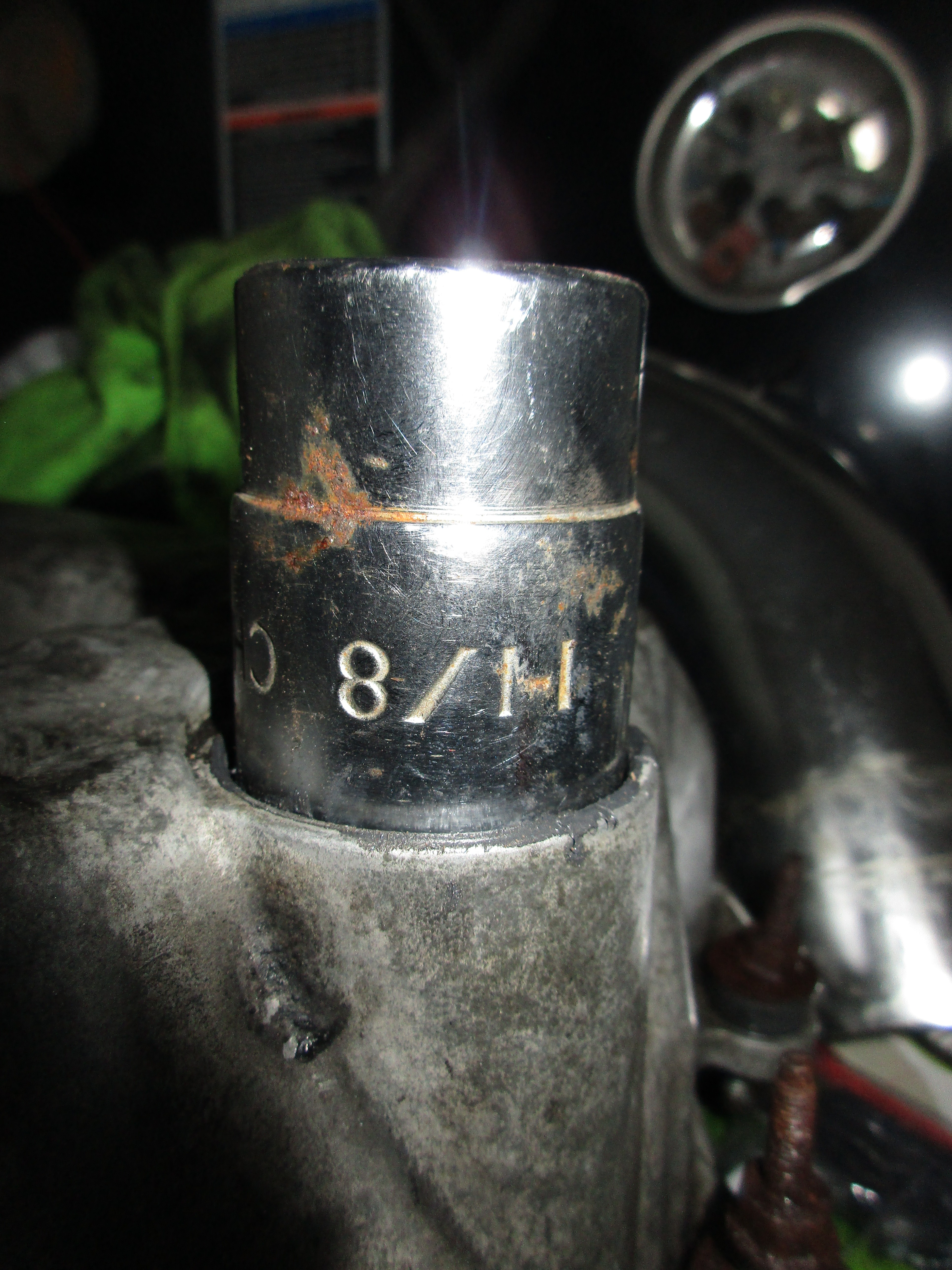 Press the new valve cover/spark plug tube seals into the grooves on the valve cover working slowly to make sure they are fully seated using a socket to roll along the seal can help a lot with this process.

Place a dot of RTV sealant on the spots shown above 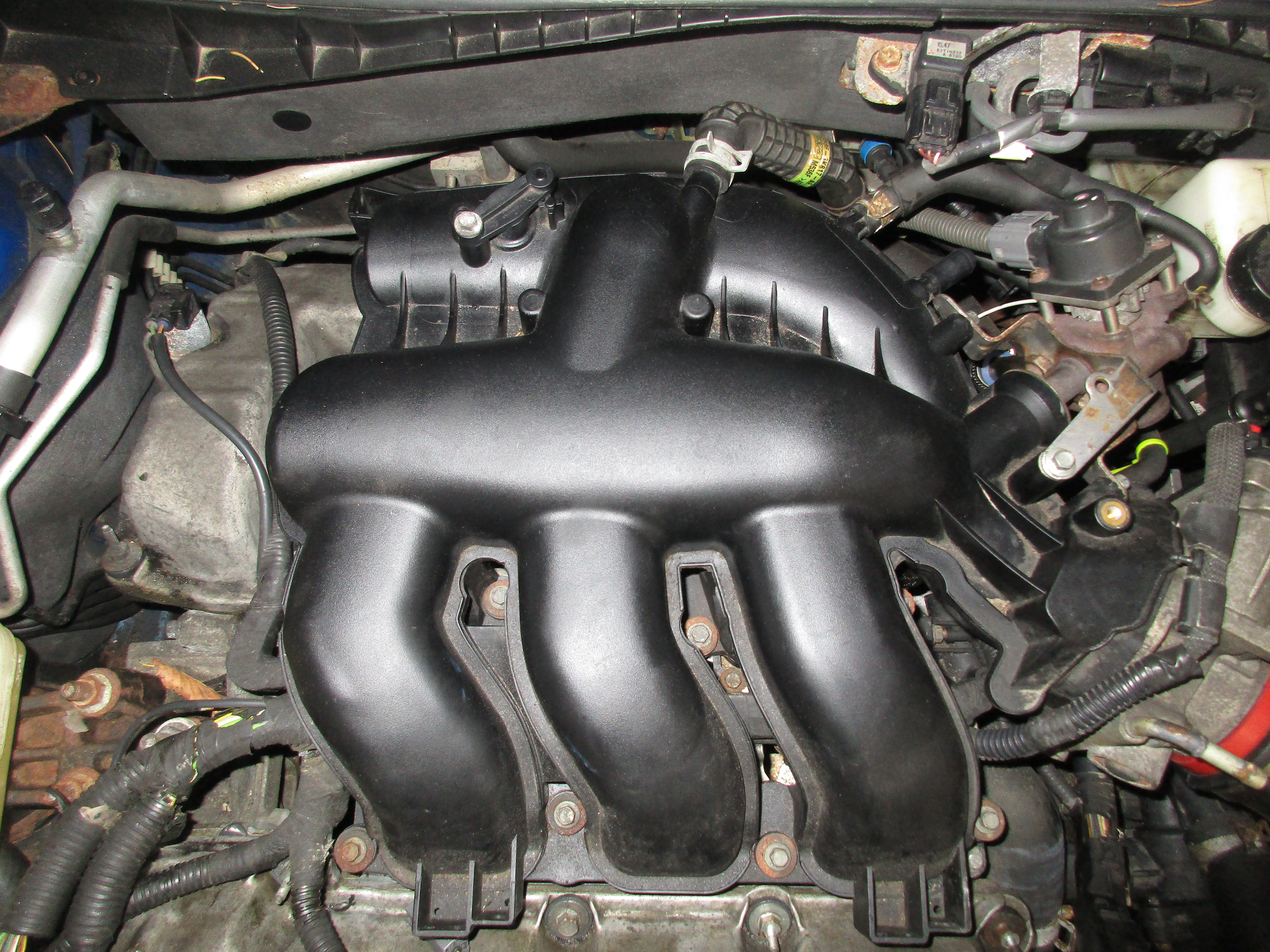 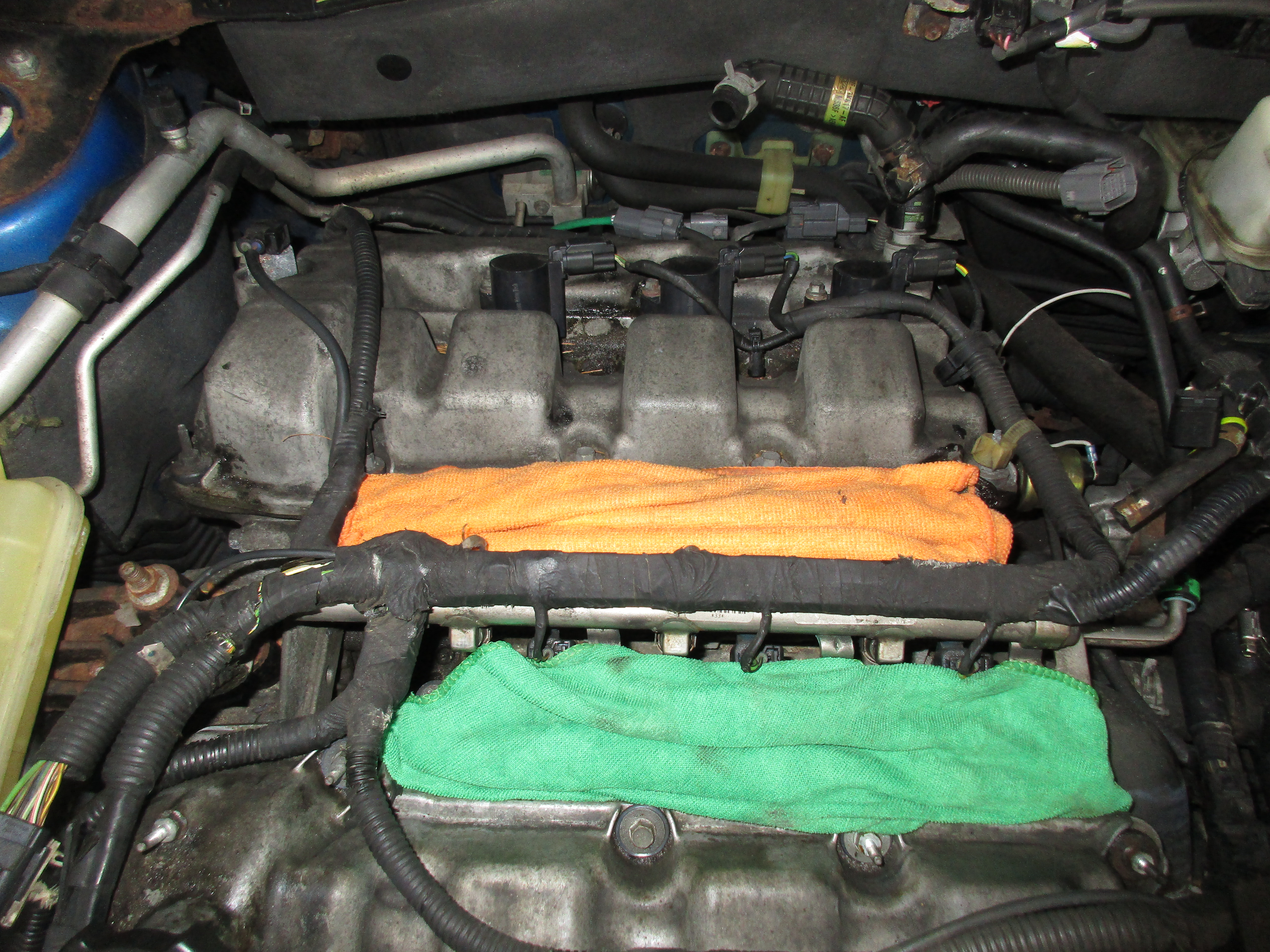 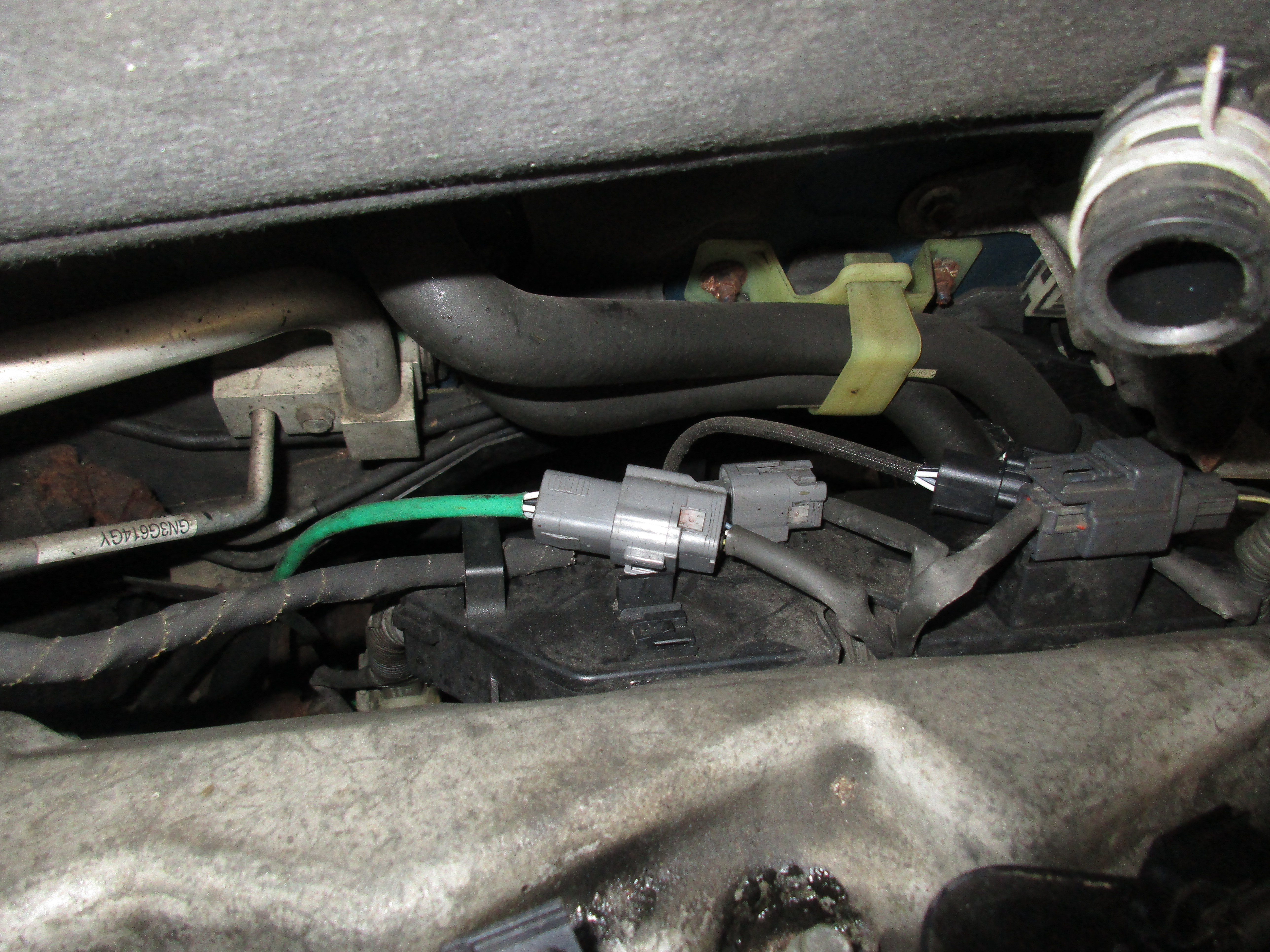 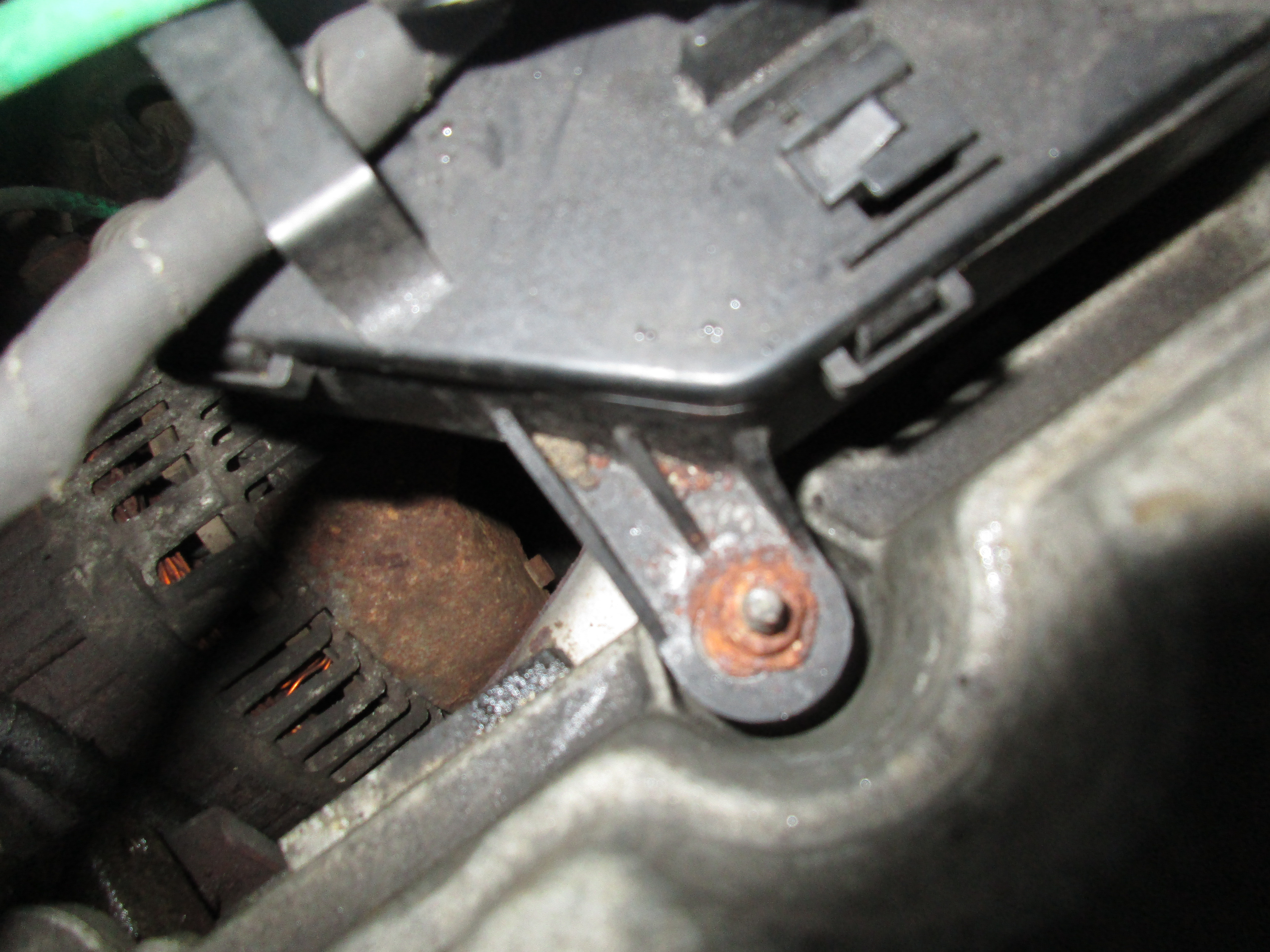 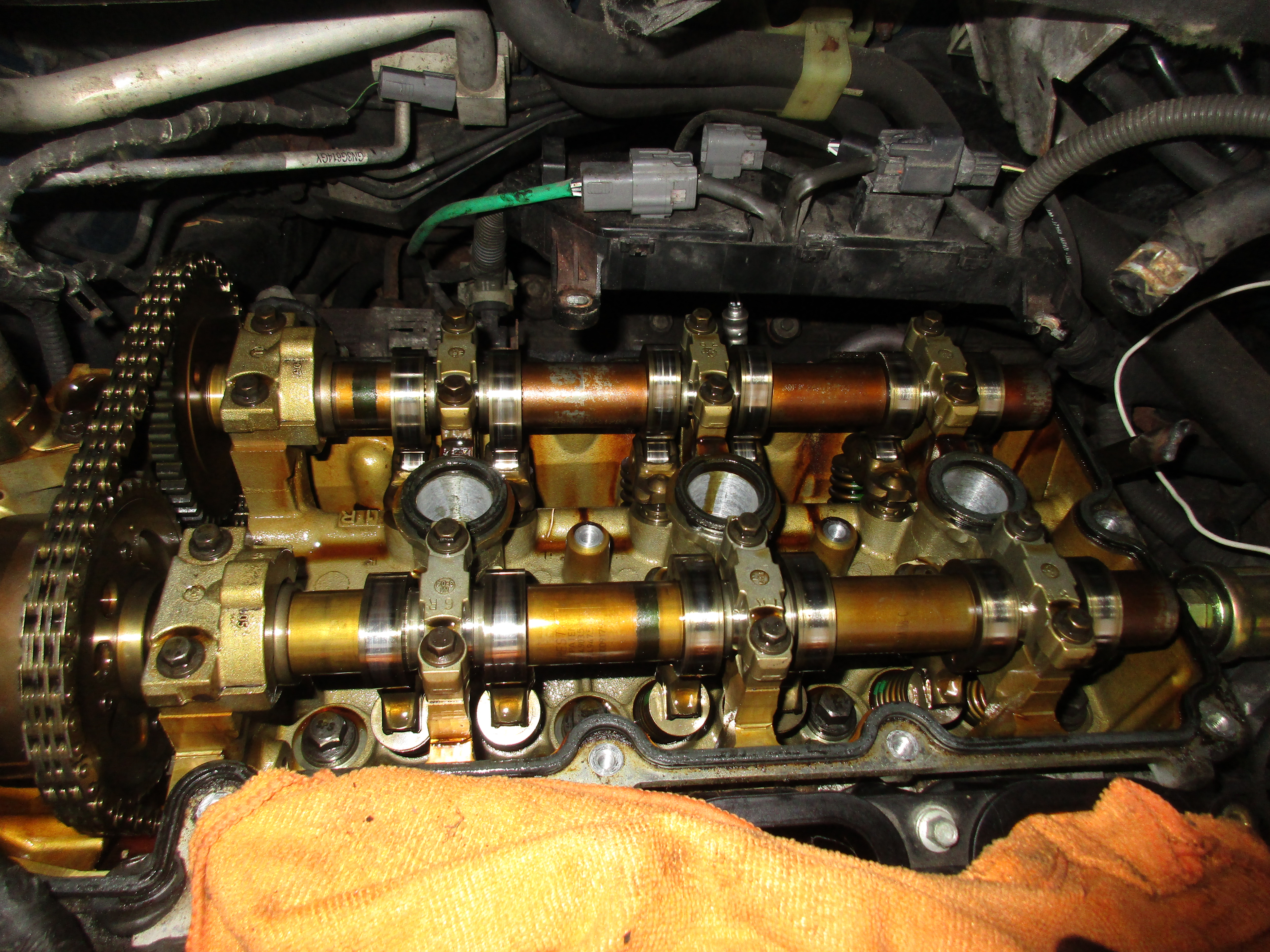 remove the coils and valve cover bolts same as above

This is where things get difficult, there's not enough room to lift the valve cover off but you have some options:
1. remove the OCV (be careful not to lose the bolt in the engine)
2. support the engine and remove the engine mount then lower the engine slightly
3. I was able to remove all of the bolts from the valve cover completely and spin it enough to get it out (used some cardboard to organize the bolts to make certain they went back in the exact same spots)

clean the surface as mentioned above

OCV seal installation is the same as above

tighten bolts to 89 inch pounds in order shown in picture 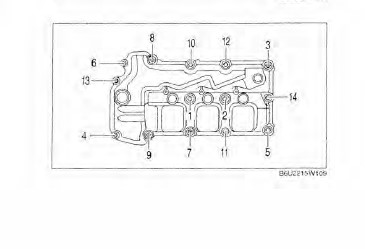 RobertD said:
needs more grease, swearing, empty beer cans, blood... your write up makes it look so quick and easy. how long did this take?
Click to expand...

Plenty of grease (mostly old oil sludge stuck to the outside of the heads from the leaks), plenty of swearing mostly at the rear one, I don’t drink, I’m just as surprised as you that there was no blood lol
The front is really easy the time stamps on the camera show it was about two hours but take into account about 15 minutes of trying to remove the old OCV seal before I decided to try heat and about 30-45 minutes of trying to clean the valve cover because I originally wanted to paint them to match the engine cover but I couldn’t get them clean enough and decided against it for now. The rear also took about two hours accounting for about 15 minutes of removing the old seal mine was so dried out that it started falling apart as I was trying to take it off it also left sections stuck to the head that were nearly impossible to scrape off without damaging the aluminum and probably another 20 minutes trying to find a way to get the valve cover off without having to remove the ocv or engine mount it also took me a small amount of time to move the wiring out of the way the outer sleeves on 99% of my engine wiring harness are dried to the point of being cement lol
All in all it was a fairly easy job the back one can just be tedious because of everything you have to remove.

Joined Sep 17, 2015
·
941 Posts
I need to do this to my car before I take it out of the garage in the spring. I also should find a new injector harness too, mine is quite hard and dry, not sure it is gonna survive being taken out of the way.
► Show Full Signature
2004 Mazda 6s 3.0 5dr. 5spd never ending money vacuum project:
CP-E headers w/catted mid + Magnaflow carback/AEM CAI/3.7L TB/Speed6 springs/RX-8 wheels
AWR 70D Enginemount/CP-E Dogbone/Custom urethane stock trans mount
Ralco shortshifter/Bose w/Auxmod/sharkfin antenna/lots of little things...

Joined Nov 17, 2018
·
110 Posts
you made good time. right on par with what the shop computer lists, which helps the shop quote labor to a customer before digging in (3.5 hours in this case but a shop has all the tools organized, plus experience and instructions)

Thanks for the step by step write up on this. It helped me out greatly when doing this for a friend who doesn't have a ton of money to take it to a full-time Mazda mechanic . It's a 2008 Mazda6 V6. It's my first time working on a Mazda and was surprised by the amount of Ford parts on this car. As I was doing this I took pictures so I would know where everything went when I was done. Somehow I missed a wire and not sure where it goes if it goes anywhere at all. If you are facing the engine there are a few wires bundled together right near the dipstick with your mystery wire in your picture. I cannot figure out what this wire plugs into if anything. You can see it in my attachments. The car runs fine no warning lights on the dash so I am clueless as to what it is for. Thanks in advance for helping

Joined 3 mo ago
·
4 Posts
When you do the front valve cover seal do this seal while you have the cover off, it's for the right rear cam seal (seeing as the engine is sideways it's the driver side cam that turns the waterpump) you just have to pull the pulley off the cam and remove 2 bolts. The pulley pulls straight off, just need a good puller. Be careful with traditional 3 hook pulley pullers, I bent my pulley because it's extremely fragile. Use a water pump pulley service set like OTC TOOLS 7483A.The cam seal is either felpro Tcs45966 or felpro tcs46071. I cant remember which design was the correct one atm. (I have an 03 mazda 6 3.0) you more than likely have a leak on this seal or will soon and it's much easier with the cover already off.
edit to get good clearance for this, you need to move your cai. I have an injen so I just unhooked it and shoved it halfway down into the fender well. Also, you're going to pull that radiator hose (the one that's glaringly in your way) off at the top driver side of the radiator and fold it out of the way(checking to make sure it doesnt crack or tear). It will leak a good bit of fluid but nothing substantial. Just top your reservoir afterwards.

Also, while you have that pulley off, you might as well remove the auto tensioner and instal a flex-fit belt (NAPA# 25-030195SF) the belt is pricey but much cheaper than the inevitable auto tensioner replacement. The auto tensioner is just 2 bolts iirc comes right off, that's it.

Joined 3 mo ago
·
4 Posts
I still havent done the rear bank, its daunting to me honestly. But for those that dont know how to take the IM off this thread made me feel a little better. Intake Manifold Removal?
If anyone has a step-by-step w/ pictures like this thread does for the forward valve cover, please share. I'm just antsy on this one...
1 - 14 of 14 Posts
Join the discussion
Continue with Facebook
Continue with Google
or sign up with email
Recommended Reading
Read More
Read More
About this Discussion
13 Replies
9 Participants
Last post:
B4W 12 d ago
Mazda 6 Forums
Mazda6club.com is a forum dedicated to the Mazda6 / Atenza. Come and discuss reliability, performance, modifications, and more!
Full Forum Listing
Explore Our Forums
Lounge Mazdaspeed6 Newbie Section Mazda6 (Atenza) Exterior Modifications
Popular Communities